Our first experience at sea 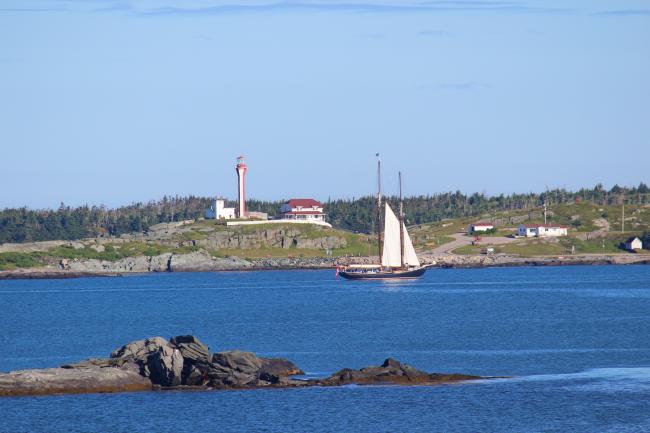 Happy Canada Day from the deck of a Canadian icon! I hope that you have a great day and are surrounded by friends and family and are truly grateful for the Canada that gives us all a home. We often remind ourselves that we are only caretakers of Bluenose II and give thanks to those who came before us and take care of the ship for those who will come after us. I like to think of Canada in much the same way.

We had a very strong and touching reminder the other day about how much the ship means to people. A young woman showed up to the gangway carrying three boxes of donuts. As she passed them to one of the hands, I asked her why she was doing such a kindness for us. She said that she wanted to recognize the crew and their hard work. She then paused and a small tear escaped, and she went on to tell us about her father who loved the ship so much. So, Ralph and daughter Sandra, thank you. Thank you for caring about this part of our history, for caring about the ship and for expressing your gratitude for this year’s caretakers. The ship’s cannon was fired as we passed Cape Forchu in his memory.

As I wrote several weeks ago, we have now had our first experience at sea with the crew. Our trip to Yarmouth was as magical as you could ever hope for. The whole trip was calm allowing us to see wildlife quite easily. Whales, dolphins, sunfish, seals, and shearwaters were all to be seen. The sunfish were beyond plentiful, and the crew stopped being excited by them. The passage at night was even better. With a clear sky and no moon every start was visible. The Milky Way lit the night and was reflected in the ocean. A truly magical night.

Our visit to Yarmouth was successful as we attended the Travel Media Association of Canada conference. With over 200 attendees, all with an audience of their own, it was a great chance for Nova Scotia and in particular the western end of the province to showcase their areas. With side trips to the French Shore, Keji and the Tusket region, a great time was reported by all. Many thanks to the local fishermen who gave up wharf space for us to dock and to the harbourmaster for his welcome.

From Yarmouth we moved up the coast to Shelburne where we were met by a host of dignitaries and a small but mighty regiment of loyalist troops. The fire dept barbequed hotdogs and hamburgers and several vendors were on the wharf. The CCGS Earl Gray was tied up with us too. Shelburne locals, tourists and business were very supportive of the ship and crew, and it is much appreciated. Particular notes of thanks to the Shelburne Yacht Club for hosting a karaoke night for the crew and Bob from Sandy Point Lobster Ltd. who brought down a treat for the crew.