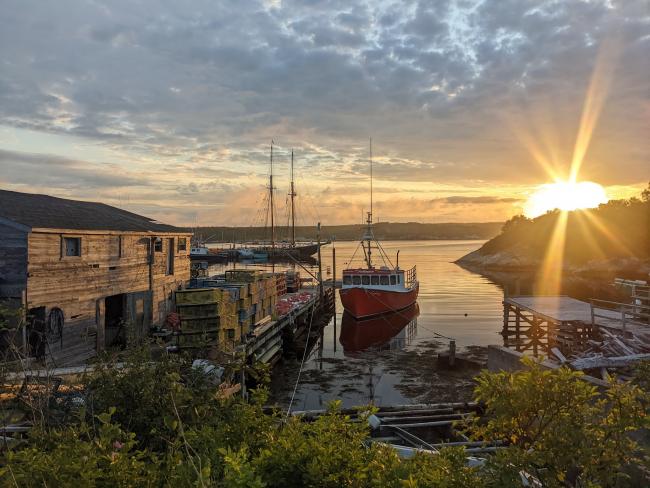 Since my last writing, Bluenose II has been away from Lunenburg visiting some small ports along the coast. These trips are important for the life of the ship for several reasons. Firstly, it allows us to train the crew in longer voyages at sea. We complete emergency drills, including rescuing a person in the water and firefighting. These drills take time to complete properly and are difficult to complete during our public open decks and harbour tour schedule. Being properly at sea allows the crew to learn the motion and rhythm of a vessel on the ocean.  We can also place the crew in different positions such as at the helm or on sheets and halyards that they might not have been able to try yet this season.

Visiting small ports also allows us to move from a tourist/ambassador-oriented operation into helping communities tell their personal stories to the crew, visitors, and their younger citizens. We always learn about the communities that we visit, from the current state of the fisheries and commercial end of waterfronts to what was done in the past. How the catches are now, and how the prices and quantities were historically. Talking to a young fisher who has a grasp of those that came before him is well worth any time he can spend with you.

Our first stop on this latest jaunt was Terence Bay. Half fishing community and half housing community for Halifax, Terence Bay is glued to the rocks on the coast. Invariably, we are well met in these communities with friendly smiles and nods. Our visits often disrupt the daily economic flow of the port and fishers have to make room for us. They do so and don’t complain but we do realize that a big schooner longer than the wharf causes disruption. We try to be good guests and are always appreciative of the effort it takes to move boats around or discharge them in a different place. Terence Bay is home of the memorial for the S.S. Atlantic. Next year is the 150th anniversary of the grounding and dramatic rescue efforts. Stand by for big news from this wonderful community.

Our next stop was just around the corner to Sambro. Another small fishing community and home to the fudge lady. I’m afraid I’ve forgotten her name but the fudge and cookies she delivered for the crew were well appreciated. Sambro is home of an inshore Canadian Coast Guard vessel. Our engineer, a former “coastie” had a good visit and caught up on the news about some of his former shipmates. Bluenose II alumni James, from Sambro, ran a shuttle for the crew to the local beach. Off watch deckhands enjoyed a rare visit to a sandy beach and certainly enjoyed the time off.

On the way home to Lunenburg, we managed to swing by Peggy Cove Lighthouse and for the first time this year had the ship under full sail. We spent about two hours honouring the iconic light house and community that has done so much for Nova Scotia tourism.

We are continuing our harbour tours in Lunenburg and now is a great time to come sailing with us and then spend some time in the Fisheries Museum of the Atlantic learning about the history of fishing on this coast. From a proper birch bark canoe to a side-trawler and everything in between.