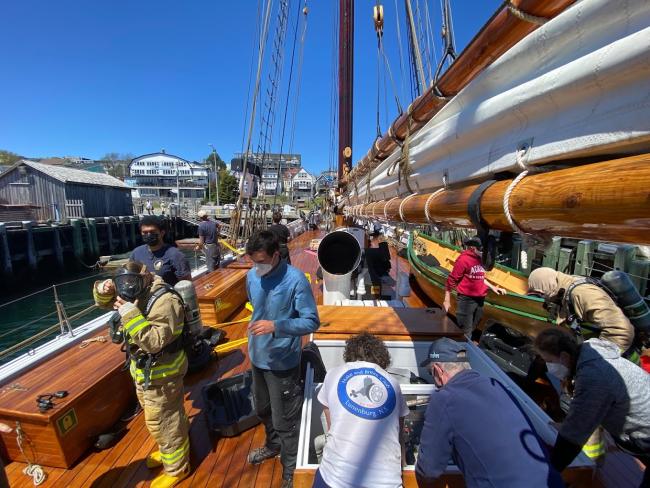 Well, eight weeks have gone just like that. It is always so hard to fathom. In the past two months, the crew have gone from green horns to a crew. They have learned the basics of paint and varnish work, knots and splices, safe working practices ashore and at sea, how to safely work at heights, how to fight fires, abandon ship and rescue a person in the water. Our young crew have all steered and raised sail watched the world go by under sail on the far side of the Battery Point lighthouse.

Monday was an important day in the Bluenose II calendar. After two months of work and effort, we welcomed our ABS inspector aboard. ABS (American Bureau of Shipping) oversees all regulatory matters for Bluenose II. All larger ships have a classification society like this. It could be Lloyds, or Bureau Veritas or DMV, or any one of a dozen major classification societies. Anyhow, when the inspector comes, they witness all our emergency drills, and they look at our safety equipment for general condition and expiry dates. The inspector spends some time in the engine room with the engineer looking at systems and checking things over. The inspection in general is quite thorough and takes the whole day. In the end, the inspector was happy with the ship and signed our certificates for another year! A big sigh of relief from this captain. 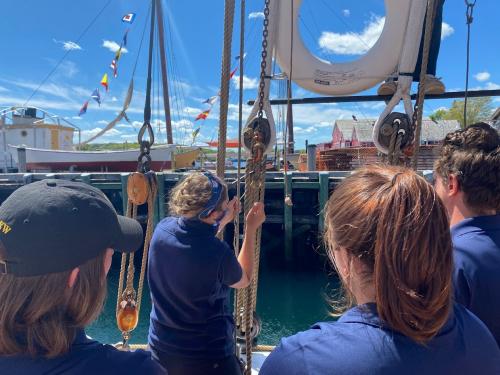 As most of you will know, Hollywood has arrived and moved into Lunenburg. I’m sure you can guess they do nothing in a small way. Rooms rented, streets occupied, parking lots leased— they have taken over the town. All in all, this is a great undertaking for the town, money is injected at all levels from individuals to business. Bluenose II is going to play a small part in the endeavour and we as crew will be “dressed in” which means we will all be in costume for the shots filmed. So, as you are watching Washington Black, maybe you can catch a glimpse of the crew! I’m sure it will be a lifelong memory for our crew.

In the middle of all the movie excitement, we have finally been able to do some sail training with the crew. Again, these are long days full of physical and mental work for the crew. The way in which the schedule works out, the crew just manage to reach a proficiency at one skill, and then we stop doing that and do something completely different. Paint and varnish? “Ok we can do that,” the crew think to themselves. And now we are going to rig the ship say the mates, “knots and splices,” say the crew, “we can do that.” “Let’s go sailing,” says the captain. Steering, emergency drills, hauling on one of the dozens of lines made fast to the rail is the task of the day. Next comes our public season where they will have to know the history of Bluenose and Capt. Walters and be able to converse from people all over the world. The skills needed to work as a deckhand on Bluenose II are varied and each finds their own niche for success.